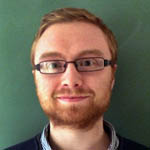 Matthew Wright
Matt is a PhD student at UCL, working in the fields of general relativity and cosmology.
ucl.ac.uk/~ucahawr    All articles by Matthew