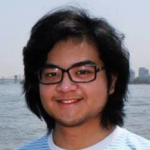 Atheeta Ching
Atheeta is a PhD student at UCL in the area of mathematical ecology. He also has interests in evolutionary game theory and social dynamics.
@atheeta2    All articles by Atheeta