Who can spot what is wrong with the map below?

In fact this map has been distorted so the land masses further from the equator are enlarged in comparison with those nearer to the equator. All 2D rectangular maps suffer from similar distortions to a greater or lesser extent and I’m going to talk about a few examples here.

The image above is produced using the Mercator projection which is classified as a cylindrical projection. Very generally, a cylindrical projections maps the Earth onto a cylinder and then effectively unrolls the cylinder to give the 2D rectangle. This results in the lines of equal longitude (ie those measuring the distance to the East or West) translating to parallel, vertical, equidistant lines. The lines of equal latitude (ie those measuring the distance North or South) translate to parallel, horizontal lines. However the further from the equator the greater the distance between these lines.

The Mercator projection can be mathematically described as

The Mercator projection was first suggested by Gerardus Mercator in 1569 and has long been one of the most widely used maps. It could be because of the map’s beauty and simplicity but ultimately its staying power has been because it is conformal. For a map to be conformal, it must preserve angles and this means it is perfect for navigation.

Gall-Peters projection of a visible Earth image collected by NASA.

Both these projections have their pros and cons; there are forums dedicated to arguing over which projection is the better representation. But is there a less subjective way to compare the distortion? Tissot’s indicatrix operates by imposing perfect circles on the globe and then transforming these circles according to the projections. 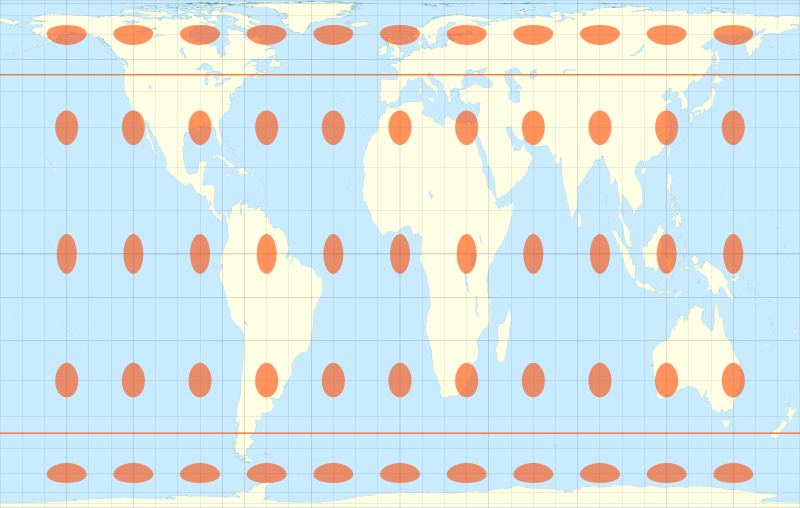 Now this blog post could go on for a while if needed. There are over 50 different map projections that have been used for one purpose or another. None of them are perfect, but there are some which get it more correct than others. One such one is the Winkel Tripel projection which is currently used as the standard projection by the National Geographic Society.

It should be noted that the Winkel Tripel is neither conformal nor area preserving. Instead it compromises between both and seen as a more successful representation of the Earth for this compromise.

Truthfully I don’t remember the last time I looked at an atlas before writing this article. After all, in an age of satellite images and Google maps, are atlases truly required? I don’t know, but what is clear is that the maps we grew up looking at are far from the full story.

Eleanor Doman
Eleanor is a maths PhD student at UCL. She works on biomechanical models of nerves and is interested in the applications of mathematical modelling to biological and medical problems.
@eleanordoman    All articles by Eleanor