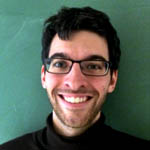 Pietro Servini
Pietro is interested in history and sport. He also happens to be doing a PhD in fluid dynamics at UCL. If he can combine any two of the three it makes him a happy man.
pietroservini.com    All articles by Pietro